On Wednesday, September 20th, Joy and I met with a local Apostolic historian.  In the interview, he explained to us that the first Apostolic to arrive in Morris, Chris Luthi (who happened to be his grandfather) was Swiss, not German as we (I) had previously been lead to believe.  This explains why Apostolics are still commonly, and somewhat derogatorily,  referred to as “Switzers” (prounounced swīt-z/er/).  While it is true that Germans Apostolics did eventually begin migrating to Morris, this ignorance of migration origin sadly indicates a loss of personal history.

After meeting with Mr. Luthi, Joy and I went to the public library to check out their selection of state and local resources.   It was there that we found the book, “They Chose Minnesota.”   What a gem!  It is loaded with information on nearly every ethnic group existing within our state’s borders.  For our study, the chapters of greatest interest in this book include: The Mexicans, The Germans, and especially The Swiss.   Perhaps it is just me, but when I read history books such as this one, it is easy to skim the through the facts (dates, names, maps) without grasping much of their significance.  However, because we were so fortunate to receive a brief history on Apostolic Swiss before hand, the historical data in this chapter took on much greater meaning.  Three points which I found particularly interesting, especially in conjunction with our study was that: 1. “Swiss emigration was not a result of overpopulation,” 2. “Emigration was stimulated by ‘American letters’,” and 3. there were “Government subsidies to remove poor people.1”  As I read each of these statements I compared them to what we  have already been told about Swiss history and I also considered how they applied to the emigration of the Apostolic peoples.  It is unfortunately to think that previously, I probably would have passed over these ideas.  To me, this reinforces the fact that Joy and I need to be diligent in bringing this history to life verses presenting dry facts.

This idea also rang true as I perused the the chapter,The Mexicans. Interestingly what immediately stood out  to me was a reference to migrant workers following the Red River and Minnesota River in search of agricultural work2.  Every study I have read on early Minnesota migration refers to the use of rivers as a means of land settlement.  The concept of “water highways” is not new to me, however, while reading this section, its significance in our history and the pure uniqueness of the Minnesota landscape really struck me.  We ARE the “Land of 10,000 Lakes”… 11,842 to be exact, 6,564 rivers and streams, and 10.6 million acres of wetlands.  Even more interesting is that Minnesota’s waters flow outward in three different directions: north into Canada, east to the Atlantic, and south to the Gulf3.  It is little wonder why our state has such a rich migration history.

Perhaps I’m being a little biased… 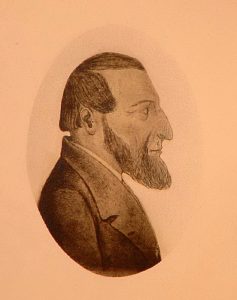 The Writings of S.H. Froehlich is a digitally combined collection of eleven translated books and letters written by Samuel Froehlich dating from 1832 until his death in 1856.  These writing are supplemented with introductions and historical background information regarding Froehlich and the Apostolic Christian Church.

The eleven books which make up this collection include:

Each book in the collection is comprised of Samuel Froehlich’s teachings and meditation on religious theory.

Thinking these books were probably just topical sermons, I almost dismissed this collection as valuable to our research.  Now, I’m glad I didn’t!  As I skimmed the 1799 pages of lectures and personal letters I immediately discovered that it was packed with a rich history detailing the lives, struggles, and persecutions of many fighting for religious freedom in the 1800’s throughout Europe.  Thankfully, the producers of the digital compilation created a well-organized index and PDF search capabilities which will allow us to find the information most relevant to our research.  Because our ultimate goal is to compare Apostolic and Mexican migration journeys, I decided to search the document for all instances of the words “America” and “persecution”.   Before diving into his personal writings, the editor gives the reader a brief introduction and outline of Froehlich’s life, including his personal trials of persecution.  Froehlich writes,

Also what I thought was particularly interesting was the editor’s account of Froehlich’s negative publicity,

“All newspapers brought reports so that Froehlich became known and was reviled throughout Switzerland. He had to flee from Thurgau and on his passport it was noted that he had been expelled as a sectarian. Now the police watched him wherever he went (page 42).”

Additionally, in a letter, dated January 12, 1856, Froehlich addressed the Brothers and Sisters in Strassburg stating,

“In Pest they have been notified that they have either to leave off from their faith or to emigrate to America (page 649).”

How does this specific history compare to the experiences of the Mexican migrant/migration?

There may be some who would say that the persecution and “forced” emigration of the Apostolics in Europe cannot compare to present day conditions of migration/immigration.  By even asking the question I feel I must tread gently.  Our histories, heritage, believes, and ideals are what makes us who we are.  They manifest within us great emotion, passion, pride and sometime anger or resentment.  In comparing migrations, I am in no way intending to negate nor minimize either groups migration histories.  But by comparing and asking,

I hope empathy and understanding will supersede.  Froehlich speaks of having to remain silent in order to be left alone, negative public sentiment, being expelled, and being watched/monitored by police.  Whether we want to admit it or not, Latinos/Mexicans have, for years, endured this same persecution throughout the United States.  Is it possible for us as a community to look past national rhetoric and see each other for who we are as sojourners, past and present?  I believe I have already asked this question in a previous post and I’m sure I will ask it again down the road, but as history continues to be revealed, I hope that people will begin to see themselves and their history in a little different light.

Factors Influencing the Distribution of the German Pioneer Population in Minnesota

In the article, “Factors Influencing the Distribution of the German Pioneer Population in Minnesota”, published in 1945, author, Hildegard Binder Johnson, lead a study on the factors which influenced the migration and distribution of rural German settlers in specific regions throughout Minnesota during the pioneer period.   What is unique about this study is that the author did not look at German migration to Minnesota as a whole, but rather examined the major settlements individually.  In doing so, her aim was to invalidate common generalization regarding early rural German settlers.  Additionally, she hoped that a more narrow study of individual settlements would contribute to a greater understanding of the phenomenon of immigrant distribution.

Some of the generalizations which Johnson identified were:

According to Johnson’s findings, the factors which did influence (or not influence) the early migration, distribution, and settlement of German pioneers varied greatly.  Some examples outlined in the study included:

How does this reading apply to our study?

Although this study did not include the county in which our research is taking place, the data collected is very valuable to our study as we considering the factors surrounding German immigration as a whole.  This study also provoked a number of questions I had never considered about the Apostolics in Stevens County, such as:

How might this reading apply to other class projects?

Although the author’s focus concentrated solely on German migration within Minnesota, her processes of investigation and overall findings can be applied to any migration and distribution of people groups.  I believe the most valuable lesson I gleaned from this study is the fact that researchers should not fall into the trap of accepting migration generalizations.  I was surprised to learn how varied the migration factors were from county to county.   By reviewing  this study, researchers will gain a better understanding of the complexities of migration factors of a single nationality which can exist within a minimal radius.

The next step in our research is to begin creating an annotated bibliography.   A couple hours ago Joy and I met with Professor Gross in the Archives Department at the University of Minnesota, Morris.  In all honesty, I went into the meeting with somewhat of a closed mind.  I really had doubts about what the University could offer us.   I was also nervous about discussing our focus on the Apostolic community because the University’s typical negative reaction towards the Apostolic conservative believe system, way of living, and perceived business practices.  But my reservations were unwarranted.   Professor Gross was very supportive of our ideas and direction.   Although he admitted that the University’s archives will have little, if no, useful resources for us, he personally provided us with a wealth of information in many other areas, especially that of oral histories and project organization.   I left the meeting feeling affirmed in our project and much less scattered in our ideas.   Even though our meeting did not provide us with any primary sources, there were a couple secondary sources recommended for us to consider.   In the attached annotated bibliography the sources listed thus far have been found in either the Stevens County Historical Society or within the Apostolic Church.   Not included in the bibliography are a number of locally archived newspapers,  cemetery records, secondary history on German migration, nor current histories on local industries or Hispanic migration.  As our research progresses those resources will be included.

When Joy and I began talking about the direction we wanted to go with our digital history project, the main concern was, “Are we going to be able to find the type of information we need?” and “Where do we begin?”.   Before we decided on focusing on the migration of the Apostolic church, I started sharing the prospective idea with various people in the Church to get their reaction.  Based on their answers and suggestions I realized that:

Joy and I visited our local historical society, the Stevens County Historical Society.   For being such a small town (approximately 5500 people), I was surprised at how well organized the historical society is and how much information they have archived.    After our visit, however, it was evident that, although we will be able to use them as great resource, we will need be creative in our research.

Some general archive resources available include:

I believe some of our greatest information is going to be found within the Church itself.   Interestingly enough, we were just informed this  week that a Church historian will be visiting our town in a couple of weeks to give a talk about the history of the Apostolic Church.   I have already reached out to him in hope of securing a personal interview and the names of other local church “historians”.   Within the Church there are also birth, marriage, and death records and a church-wide publication called the The Silver Lining.

I have provided a good physical list of resources in which to jump-start our research, but I feel like the question, “Where do we begin?” is a question that goes a little deeper.    I believe we begin with people.  We begin with relationships.   We begin with open minds and open hearts.

For when this research begins, the stories of the those in past and present will become a part of our life stories forever…. 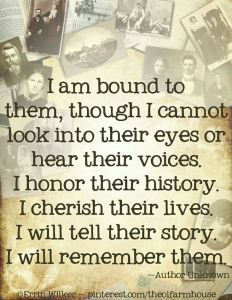