I’ve spent the last couple days transcribing Irish names that we found on graves in the local cemetery and trying to decipher names and dates. Some things I just couldn’t make out, which was very frustrating. I used the HeritageQuest database to try to find these people, but I was mostly unsuccessful. I have used HeritageQuest before successfully so I know the database is a good one with detailed census and property records for this area, which made the fact that I couldn’t find most of these people really weird. It’s driving me nuts because some of the grave markers had things like “native of Dublin” on them, so we know that they we immigrants. I just can’t find record of them outside the cemetery. 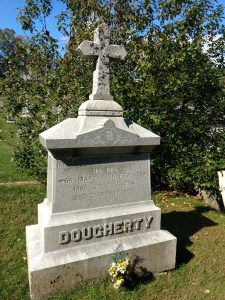 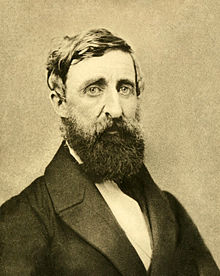 Lojek’s article focuses on Henry David Thoreau’s writings about the Irish as a way of examining the common stereotypes of the time. Throughout many of his books, letters, and other writing, Thoreau describes Irish people and characters as dirty, superstitious, rowdy, drunkards, poverty stricken, and firmly lower class. These descriptors, Lojek says, are on par with how the general population viewed the Irish immigrants. One thing of note is that Thoreau rarely disparages the Irish for being Catholic, despite the strong anti- Irish Catholic sentiment that was common throughout New England at the time. Lojek also describes how Thoreau’s most frequent mentions of the Irish occur around and before 1850, when Irish immigration was at it’s height, but as it begins to taper off, and the Irish become more accepted, Thoreau becomes more sympathetic towards the Irish (specifically the way they are exploited and earn very low wages), and calls them hardworking. Lojek concludes that Thoreau’s writing was no more accepting or racist than the common attitude given the time period. Lojek’s writing is clear, concise, and could be easily read. This article is useful for examining the common attitudes (and their shifts) towards the Irish immigrants, and it also provides several key figures and dates for Irish immigration.

We’ve been working to find some new sources as well as visiting the local cemetery and looking for Irish immigrant graves. It was a bit of a needle in a haystack, but we did well. Next we plan to trace some of the families to see where the came from. We’ve also been doing a lot of behind the scenes work like our COPLAC contract, which is now in it’s second draft. We also have more sources added to our bibliography. I went through the other day and found older photos and sketches of many of the areas mentioned in previous posts. They’ve been loaded into the Google My Map that we are using to keep track of locations and journeys.

Google My Maps is a pretty instinctive tool and isn’t hard to learn. I like how we can upload our pictures and tag places. We used the places we’ve come across in our research so far, and we hope to continue to add more throughout the semester. We only have a few places in Ireland that we are sure immigrants from North Adams came from. The lines represent different people’s journeys, but these are very loose guesses, as we have very little documentation as to the routes they took or their method of travel. Google Maps was better for us than Story Maps because it was easier to use and we just liked it’s appearance. Kate and I both worked on finding and entering the locations. Kate did the lines. I found photos for most of the locations and created citations for them. Most of the sources are a bit strange because I found them through a Google search. I hope that we will have a little more information and locations to add in the future.