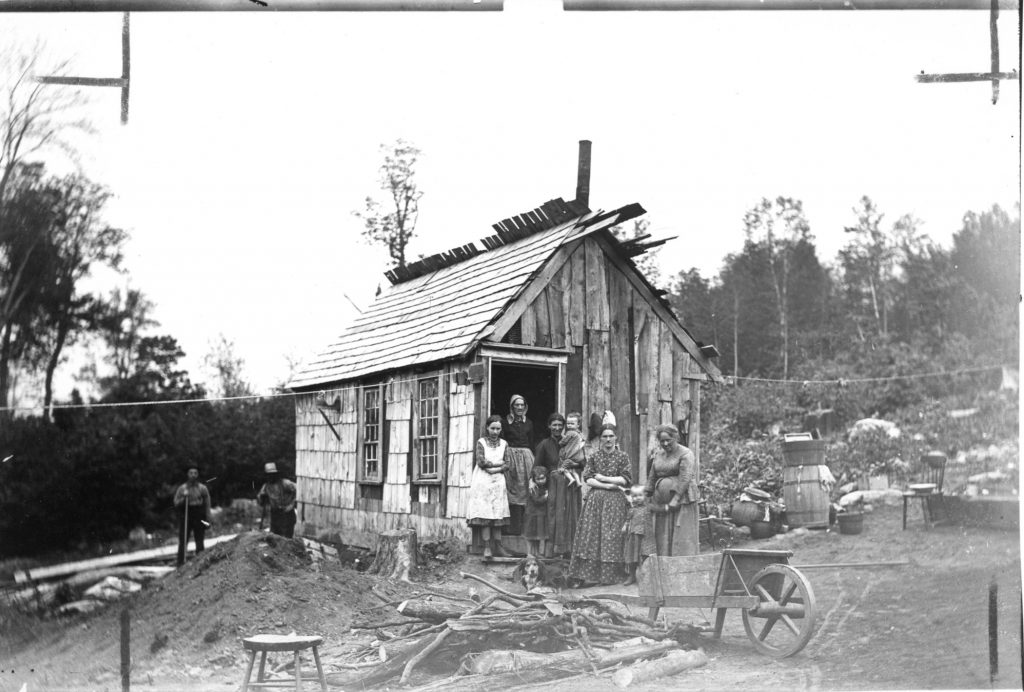 Photo Credit: North Adams Historical Society. These are images of the homes of men who worked on the Hoosac Tunnel. They lived in a sort of shanty town on the outskirts of the village

North Adams, originally founded as part of Adams, Massachusetts in 1778, was established as its own city nearly a hundred years later.  The town was incorporated in honor of Samuel Adams, the famed founding father and governor of Massachusetts.  The land in the north of the village was too hard and rocky to support much farming causing most citizens to inhabit the South End.  Once settlers realized the potential of water power to run mills and early factories North Adams began to grow rapidly.  North Adams is located along the connection of the Hudson, Connecticut and Hoosac Rivers, making water one of its most abundant natural resources.   Lumber was another natural resource North Adams had in abundance, being nestled among the Green Mountain and Hoosac Ranges.

The first known Irish immigrant to North Adams was a man named Michael Ryan.  Ryan was born in County Kildare, Ireland and traveled to America with his wife in the early 1800s, although the exact date is unknown.  The family landed in Quebec and quickly made their way to Montreal, from there they traveled to Troy, New York.  At this time Troy already had a significant number of Irish immigrants and the Ryan’s knew they could find a sense of community there.  However, around 1825 Michael Ryan met a representative of the Brown Harris & Co. Print Works of North Adams who was recruiting laborers to work in the mill. Not that long after the Ryan’s arrived in North Adams other Irish families and young men seeking work were settling in as well.[1]

Recruiters were common place visitors to local immigrant groups in cities, offering a better shot to make something of their new lives in America.  American companies took up ads in Irish newspapers and sent recruiters to Ireland promising to pay for the voyage to America if the Irish came to work for them.[2]  During the Great Famine, many Irish saw this as their only way to survive and accepted the work as quickly as they could.  The Ryan’s route through Canada was not uncommon, most Irish who settled in the Berkshires sailed for their new homes on lumber ships bound for Canadian ports.  Some of the first Irish families recorded to have settled in North Adams after the Ryans were the Collinses, Coughlins, Crowleys, Galligans, Pynes, and Rowans.[3]

These first families bound together to form their own little piece of home.  They faced harsh discrimination from those already in the area, most of whom where Protestant ‘Yankees’.  The Irish throughout the nineteenth century were considered by the majority of the Nation as inferior and ‘not white’ enough to be considered first or even middle-class citizens.  Some of the words used to describe Irish immigrants during the Great Famine era were; savage, bestial, lazy, sensual, low-browed, and groveling.[4]  Many of the jobs offered were dangerous and considered unfit for the better suited of society.  As more and more mills and factories began opening in North Adams, the town decided a railroad was needed to connect Upstate New York with the east coast.  The Hoosac Tunnel was proposed and hundreds of Irish Laborers were hired to construct the four-mile project.  The work was extremely dangerous and the Irish who survived its construction were seen as dirty and vulgar men who should not be allowed in society at all.

[4] David R. Roediger, “Irish-American Workers and White Racial Formation in the Antebellum United States.” The Wages of Whiteness: Race and the Making of the American Working Class, 133-63. London/New York: Verso, 1992.