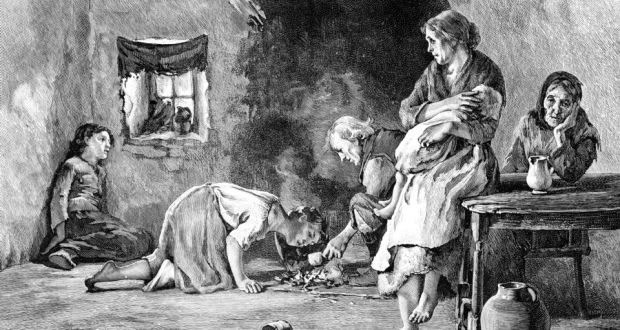 In 1845 one of the worst agricultural disasters to ever happen hit the Island of Ireland.  Their economy was largely agrarian and had been for hundreds of years, but after being conquered by England in the beginning of the 1100s, more and more Irish were pushed to the land in the west which was full of rocky soil where very few things grew.  The English and their Irish supporters wanted the best lands for themselves which was primarily set in the North and East of the island.  The potato however, thrived in the harsh soil and by the 1840s it was practically the only source of food for millions of middle and lower-class Irish.

Men who worked the fields ate nearly 13 pounds of potatoes a day while women and children consumed anywhere from 5 to 9 pounds.[1] So, when the blight struck, a disease that causes potatoes to mold and crumble, the Irish had no idea what to do.  They had nothing else to fall back on, no way to make up for the lack of food, and no money to buy anything else.  People began to starve and over 3 million people relied on a limited number of soup kitchens as their only source for food.[2]

Most believed leaving was their only chance at survival and between 1845 and 1851 nearly 2 million people left Ireland.  Some moved to England or other parts of Europe, but most sailed to North America on ships that became known as coffin ships.  Travel at this time was very dangerous, disease could spread in a heartbeat because the boats where so overcrowded and there was little to no sanitation.  Those who did not leave Ireland faced even worse conditions as the years went on and the crops continued to fail.  An estimated 1 million people died due to starvation or disease caused by lack of nutrition.  Those in power in Ireland were generally the men who owned most of the farm land which the lower classes were renting.  During the famine thousands of people who could not keep up with their rent were forced off their farms. The only place they had left to go were the workhouses. England sent only a limited number of supplies, believing if they sent aid the Irish would become dependent on them and would never again work for themselves. England exported more food out of Ireland than they sent in while the famine was raging.[3]

If you would like more information about the Irish Famine, check out this great article and video on the Encyclopedia Britannic website.  All you have to do to get there is click on the text above in green, but do not forget to click the back arrow when you are done to come back where you can read more about the Irish Immigration story to North Adams.