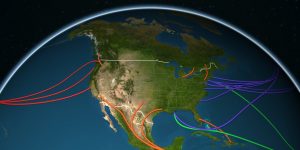 This section explores the general history and migration of both the Apostolic and Mexican people to what is now the United States.

When discussing the migration of the Apostolic Church, it is important to consider its religious and economic context.  The early and mid-1800s was a time of great innovation, industrialization, cultural enlightenment, and the gradual acceptance of religious expression.  It was also, however, plagued with political upheaval, economic depression, and famine.  While religious freedom was an attractive migration factor for many Europeans, exemption from military service, economic gains, and the pursuit of inexpensive agricultural lands are all factors that played a major role in the migration of many Apostolics of German and Swiss origin.

In a similar way, the migration of people from Mexico was greatly influenced by war, economic depression, and economic opportunities.  The first major wave of migration out of Mexico began with the start of the long and bloody Mexican Revolution in 1910.  War refugees and political exiles sought asylum in the north. Subsequent waves of Mexican migration were greatly influenced by Mexico’s faltering economy and the agricultural and industrial needs of the United States.   While the European migration of Apostolic believers has long since ceased, migration patterns of Mexican nationals to and within the United States continues to ebb and flow based on economic and political influences.

It is important to acknowledge that while this section seeks to provide an even comparison of the histories of two distinct migratory groups, the length of time separating the German and Swiss migration to the United States, in addition to the multiple facets of Apostolic migration, has led to a disproportion in the length of historical contexts.  Regardless of this slight imbalance, this section evenly focuses on defining the terms used throughout this study and the general history and migration patterns of each group.