THE FIRST APOSTOLICS IN MINNESOTA

The enactment of Homestead Act in 1862 and the expansion of the railroad system in Stevens County in 18711 brought a number of young families to Minnesota wishing to establish themselves as farmers.2  In the summer of 1902, an Iowan land agent convinced Chris Moser and his son-in-law Rudolph Tschudi of Rock Rapids to look at land in Minnesota.  After seeing the land, they decided to settle just north of Morris, MN.  Shortly after, Moser persuaded his brother-in-law, Chris Luthi, Jr. to also look at land in the area.  Subsequently, Luthi decided on purchasing a large section of land seven miles south of Morris.3 By the spring of 1903, Moser, Tschudi, and Luthi moved their families to Stevens County, soon to be followed by a number of other Apostolic families from Lester and West Bend, Iowa.  This was beginning of the Apostolic migration to Minnesota.

Chris Moser and Chris Luthi are considered to be the founding fathers of the Stevens County Apostolic fellowship.  Today, their decedents make up a large portion of the Apostolic Christian Church in Stevens County and are spread throughout the United States.

Although Euro-American Apostolic migration has ceased, there still exists intentional movement of Apostolic Church members and followers in the United States, Mexico, Japan, Haiti, and many other parts of the globe.  The primary reasons for contemporary migration center around marriage, family, church planting/bolstering, and ministries.

Marriage: In the Apostolic Church, members strictly marry only within the faith.  For this reason, young singles will travel great distances to fellowship with other congregations as a means of forming like bonds and to possibly to meet future spouses.   Most often the bride will relocate to where her new husband resides.

Family: It is not uncommon for families separated through marriage to eventually come back together.  This can happen as young families relocate due to change in careers or returning to family farms or as parents retire and decide to relocate closer to their children. 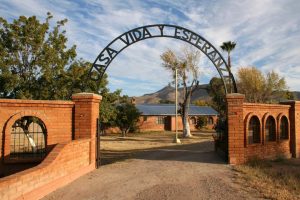 Church planting/bolstering: Migration within the church also happens as a result of establishing new churches or providing support to existing churches.

Ministries: The Apostolic Church is involved in a number of ministries and relief efforts in the United States and around world. A few of their ministries include: Casa Vida y Esperanza (a home for children and a community church in Sonora, Mexico), Rural Gospel and Medical Mission of India (providing an orphanage, medical work, and education in India), and Hospital Lumiere (a hospital managed by Apostolic World Relief/Harvest Call serving the physical and spiritual needs of Haitian people).4

Apostolics in Stevens County are very active in the Morris and Hancock communities.  Although agriculture continues to be an important aspect of Apostolic life, Apostolics also work, own businesses, volunteer, and socialize in a number of areas throughout the county and in a variety of capacities.

A number of corporations, which bolster communities and contribute to the economic health of Stevens County, were once Apostolic, family-owned farms and businesses.  Over time these farms and business have successfully evolved into multi-million dollar corporations.  Regardless of their current standing, these corporations have continued to maintain the faith’s core values of ethics, hard work, and integrity.  These industries, whose heritage can be traced back to the original Apostolic settlers, fall into two main categories: agriculture and manufacturing.

Two of the largest agricultural corporations headquartered in Stevens County are Riverview Dairy5 and Wulf Cattle.6  Riverview Dairy founders, Paul Fehr and wife Anna (Luthi) and the founders of Wulf Cattle, Leonard Wulf and wife Violet (Luthi), are all descendants of Chris Luthi, one of the very first Apostolic settlers in Stevens County.  Over the decades, both of these family farms continued to grow and develop, eventually forming into independent corporations.  In 2012, Riverview Dairy and Wulf Cattle merged into a partnership which has grown to become one of the largest privately held agricultural corporations in the Midwest.  With the addition of the Wulf Cattle merger, Riverview has expanded their services into four primary segments: dairy, beef, agronomy, and construction.  Currently they have beef, dairy, and/or calving facilities in western Minnesota, South Dakota, Nebraska, Arizona, and New Mexico.  Riverview depends on a large number of Mexican labors and professionals to maintain their growing operations.  The majority of their Mexican staff are hired on TN visas as agronomists and veterinaries and on H-2A visas as temporary farm laborers.  Although Riverview is a now a multi-million dollar corporation and known throughout the world, they continue to maintain their core family values and dedication to employees.7

Both of these companies continued to develop independently until 2011, at which time Superior and its group of investors acquired Hancock Concrete.  In addition to acquiring Hancock Concrete, Superior also acquired Westmor Industries in 2008 and a number of other companies throughout the United States, Canada, and Brazil. While Superior does not have a high percentage or need for Mexican labor, Hancock depends greatly on the temporary, Mexican H-2B immigrants. Today Superior Industries, Inc. is a multi-million dollar company known all over the world for its material handling and aggregate processing equipment.  As with Riverview Dairy and Wulf Cattle, Superior Industries and Hancock Concrete have continued to maintain the core Apostolic values set forth by their founding patriarchs.
Image Bibliography