Who were the Wichita?

Focused primarily on gardening and hunting to provide for their families during the spring and summer seasons, the Wichita lived an enriched lifestyle based on the natural resources around them. Often referred to as the “Grass-house People,” the Wichita were known for the incredibly large structures they created as their homes out of grass.

Governance for their Villages: Establishment of Chiefs

Unlike other native tribes, the Wichita never established a formal set of government to utilize within the villages, although it should be noted that each Wichita village was politically independent. Although they did not believe it was necessary to establish a set government, the Wichita allowed each family to govern themselves independently in regards to internal affairs. This of course differs from the interest the Wichita did have with foreign affairs, in which the Chief of the village was responsible for. Each politically independent village was essentially represented by a Chief, a Sub Chief, and a Council of Warriors whom all focused on foreign affairs. The election of a Chief was established through election, where a an unofficial Council of Warriors elects the Chief based on his wisdom among other characteristics that have been deemed necessary for the Chief of the respective Village.

Due to the fact that the Wichita believed that there was little to no need for formal governmental structures to be created to run their villages, each household and its respective members was responsible to delegate and function in that respective manner. For the Wichita, a household was not solely determined by one physical grass house, rather a family and their respective relatives determined a household within itself which allowed them to live in either one, or multiple grass houses which would be erected and placed close to one another. Ruled by the concept of the matriarchal society, such families comprised of a mother, her husband, and their unmarried children, as well as married daughters and their families. Since the Wichita governed themselves with the influence of the matriarchy, the head of the household was not the eldest man or father figure; the woman was the head or responsible for the family affairs instead if they all resided in the same physical home. In instances where multiple grass homes were used to house their families, the eldest woman of the family was considered the head of the household, and thus responsible to delegate as such. The Wichita lived an incredibly intermingled yet independent lifestyle where each family was autonomous within their respective village itself.

The Importance of the Seasons: Agriculture and Hunting Habits

The Wichita determined a great portion of their lifestyle based upon the seasons and the natural resources around them; due to the fact that they were an agriculturally based group of natives, they relied heavily on the land to provide everything they needed. During the spring and summer when it was warmer, the Wichita lived in villages filled with their incredible grass houses. Here, the Wichita women focused on gardening and cultivating crops such as corn, squash, pumpkin, tobacco and beans in order to prepare for the harvest in the fall. Once the autumnal season came around, the crops that had been carefully cultivated were harvested and stored safely for later use by the Tribe. Additionally, when the seasons transitioned from summer to fall, the Wichita transitioned in focus as well in regards to providing for the people; shifting from their agricultural base to their practice of hunting, the entire Wichita Tribe or band abandoned their grass house villages and moved into tipis. The location of their temporary homes for the fall and winter was determined by the migration pattern of the Bison herds the Wichita men followed due to the fact that the Bison played a major role in their lifestyle. 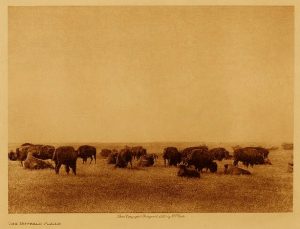 Search Throughout the Site