A Stroll Through the Mountains

Today we ventured to the Western Regional Archives and sat down with an archivist, Heather South, who gave us more information than we were ready to receive. She took us back to early exploration of Western North Carolina, specifically in an area known today as Morganton. There is currently an archaeological site there where they uncovered the Fort San Juan from 1567. She told us about other early explorers and we spoke about the Cherokee population that was forced out of this area and came back. This area of focus interested us slightly and Heather pointed us in the direction of the Museum of the Cherokee and their website as well as the Western Carolina University digital archive on the Craft Trail.

Another group that Heather recommended we take a look were the Scotch Irish clans that came to this area and the Highland Games which have been going on for well over 50 years. An interesting thing about the Games is that one of the original organizers is still alive and participating today so if we decided to work with this group we could talk to someone who was there when the Games began.

Hot Springs, NC is a small town that was built by German ‘enemy aliens’ who were basically prisoners of war, which is something I had no idea about until today. There were internment camps there during WWI which forced thousands of Germans to this small town. Once there they created a village and influenced the architecture of the town. When the war ended most of the Germans were transported to Georgia but many came back with their families and made Hot Springs their home. There is an event there in the second week of September commemorating the centennial of this internment camp and community, which we will definitely be making our best efforts to attend.

At this point, the conversation turned slightly. We asked Heather what brought people to this area. The mountains of North Carolina are beautiful, but there is no land for plantations, and getting here before the railroad was no easy task. So why come? As we talked we realized that tourism has always been a huge draw to this area of the state and so we brainstormed ideas to bring that into this project.

The first idea was the Alexander Inn. There are boxes of visitor logs and their sales records as well as family photo album in the archives that we were able to look through a bit today. Below is a picture of the Inn from the early 1900s. This inn was a stopping point in Swannanoa for those who did journey up the mountain pre-railroad. They could rest there, feed their horses, send mail, and buy goods. The Inn is now a private residence where the family still lives to this day, and a member of the family who was around when it was still functioning is still alive to this day as well and gives tours of the area. 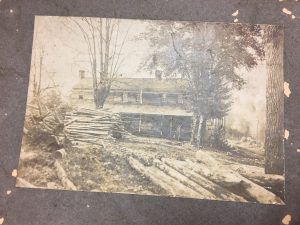 Another idea that we had related to tourism in WNC was to look at the Blue Ridge Parkway. Construction of the Parkway took place during the 1930s and brought new people to the area to cut into the mountain and construct the miles and miles of roads. We were thinking about comparing it then and now, potentially looking at the types of people that visit the Parkway every year and how that has changed since its completion. Looking at the cultural impact of the Parkway would also be fascinating. Heather told us about the Teapot Museum, an idea proposed to bring people off the Parkway and into a small town. Also important about the Parkway is that the land was, in some areas, being used prior to construction. What happened to those people? Where did they go? Resources on the Parkway are plentiful in this neck of the woods and taking a dive into them and looking at the Parkway from a different perspective would be fun.

The last idea that we discussed, also related to tourism, were summer camps. Church camps have been coming to this area for decades. Many churches have archives about the camps and the folks who attended them. An option for a project could be to go through those archives and see if people who came for camp were enticed to come back later in life and park themselves in these mountains.

All in all, we got so many ideas from Heather today. Ideas on where to go to do research and who to talk to, as well as ideas on what groups to focus on and what angles to come at them from. There is so much to consider now and deciding on what to research is going to have to do a lot with guidelines for the project. Will we be allowed to study an area instead of a people?