The Democratic Republic of the Congo

The Democratic Republic of Congo, (the DR Congo or the DRC), formerly Zaïre, is characterized today by civil war and corruption. According to the BBC, the civil war has “claimed up to 6 million lives, either as a direct result of the fighting or because of disease and malnutrition,” (2017). The president, Joseph Kabila, has ruled since 2001. The following timeline presents highlights of the DR Congo’s history.

The linguistic composition of the country can be summarized by the following chart: 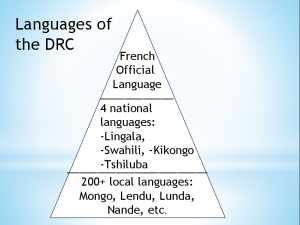 Attribution to Raymond Sangabau, English Professor at the University of Kinshasa. Provided by Dr. Sally Cook via email correspondence 12/12/16.

Furthermore, in terms of economic conditions, which has been mentioned by some of the immigrants as a driving factor for leaving the Congo, things are also on the bleaker side. Mainly focused on natural resources (specifically minerals), the Congolese economy was heavily affected by the drop in copper prices in the 70s and the coup by Mobutu, who began to manipulate the economy to serve his personal and political goals. The civil war that broke out only worsened these problems. Since moving to a more market-based system, the economy has expanded during the past years after the end of the civil war in 2003.

The civil war still had a major effect though, especially on education, when government funding drastically declined. Though it is mandated that all children attend primary school, there is insufficient funding and not enough teachers for the country’s students. Lack of educational opportunities is another reason immigrants cited for coming to the US.

According to the Congolese Refugee Health Profile from 2014, the United Nations High Commissioner for Refugees reported more than 400,000 Congolese nationals seeking refuge outside of the DR Congo, primarily in Uganda, Rwanda, Tanzania, and Burundi from 2013 to 2014. Many Congolese refugees who are admitted to the United States come from as many as 36 African countries. The greatest number of Congolese refugees came from Tanzania (1,742). From 2008 to 2013, approximately 11,000 of the 400,000 Congolese seeking shelter came to the United States, averaging an approximate caseload of a mere 2,000 refugees a year, and the top resettlement states were Texas, Arizona, and New York.

11 – AFP. “When Laurent-Desire Kabila’s Alliance rebel troops entered Kinshasa on May 17, 1997, they were hailed by the people as ‘liberators’.” May 17, 1997. Daily Mail. http://www.dailymail.co.uk/wires/afp/article-4514408/Bitter-legacy-20-years-Kinshasa-recalls-Kabila-liberation.html