Patrick and I have really begun to outline, concretely through our project site, what our final project on the Finns of New Hampshire is going to look like. We have begun to develop some specific pages and have decided that we want to make sure the navigation of the website makes sense so as to direct viewers through our story in a logical manner but also to separate different categories of the project so it is easy for a viewer to focus on a specific aspect of our project if they so choose. We plan to outline the background of Newport, New Hampshire before the Finns migration to the area to explain why it is they established their population there. We will also have page(s) dedicated to the Finnish experience in Newport upon and just after their arrival in the late 19th century. We will do our best to explore the lasting impact that they have had on Newport and possibly the entire state of New Hampshire and if necessary create a page for that evaluation. We also plan to compare and contrast Finnish migration to other towns and cities in New Hampshire (and Fitchburg, MA) to establish what it was, if there was anything, that was specifically unique to the relationship between Finns and Newport, New Hampshire. Some parts of our project that we are particularly excited about are the photo page and the lesson plans. The photo page will digitally post the photos we have obtained regarding the Finns in Newport that are and are not directly used throughout the site/project. The reason that we want to include this page other than for the enjoyment of looking at historical photos is to hopefully identify some of the unknown Finnish individuals in Newport, New Hampshire whom we have pictures of and want to make visible. Secondly, we are going to create and make lesson plans available on our site. They will be fully developed Social Studies lesson plans focused on Finnish Migration to New Hampshire. These lesson plans will be free for educators to access if they want to teach about their local migration history. They will be great for students to make connections with history and to work with primary sources. Not only does this create the potential for greater awareness of the cultural crossroads throughout New Hampshire history, but they also provide an interactive component to our research.

As it turns out, Patrick and I have to make some more trips to the historical society as well as the archives in the near future to get hold of most of our secondary sources. However, thanks to the world of online shopping, we both have copies of The Finns in Newport, New Hampshire by Olli Turpeinen, our chief secondary source, on their way to us in the mail. That means we have yet to obtain them ourselves, and this was the source I had hoped to investigate, but in the meantime I decided to read “Newport’s Finnish People” by Joan Chandler, who uses Turpeinen in much of the article which discusses the Finnish people and their migration and lifestyle in Newport, New Hampshire who largely arrived in the 1880’s[1].

Chandler’s thesis was unclear and because I know that the author relied heavily on Turpeinen’s work, I would prefer to review The Finn’s in Newport, New Hampshire before using this source to report heavily on the Finns in this area. Nonetheless, I did find a few interesting bits of information that are worth sharing. One of these is something my COPLAC class has talked about, specifically as our colleague Amy Schmidgall has some background knowledge on the subject. The subject is that of Finnish names, “Because their names were difficult for others to pronounce, the Finns often took on more “American-sounding” names. “Bill Johnson” might once have been “Yrjo Liimatainen!”[2] Amy had informed our class that the Finnish tend to have eccentric and unusual names to Americans and she was not lying. It is thought provoking that the Finnish so often changed their names to more easily assimilate into American culture. It is important to note that the Finnish were one of the European migrating groups that were understood to be more assimilable, and thus, desirable to Americans, and still, they had to sacrifice parts of their culture to appropriately join the self-proclaimed, American “Melting Pot”.

Chandler also wrote about the political position of many Finns in New Hampshire. Again, I am going to refer to Turpeinen’s book before I discuss Chandler’s work in more detail. One thing Chandler wrote that intrigued me, though, about the Finns, “It was becoming uncomfortable to be (or admit to being) a Communist. One local Communist laborer was said to have applied for US citizenship. The FBI, investigating his background, interviewed the man’s employer, George Dorr. Mr. Dorr said he didn’t wish to fire the man because he was an excellent worker.” Again, it is interesting to me that it is possible that a Finnish man was investigated due to his ties to a political party, specifically because the Finnish may have influences from Russia. These are patterns that we still see today in American society. The acceptance of migrants is dependent on how assimilable they are.

Immigration and Impact: The Finns of New Hampshire

Research Question: How has the migrant history of the Finns to New Hampshire affected the culture of Southern New Hampshire?

Goal: The broad goal of this project is to promote awareness of intricate migrant histories in America and their impacts on local cultures in a time where the word “immigrant” is a controversial term that often has a negative connotation within American society.

There was not one particular moment that led Patrick and I to decide to investigate the Finnish migrant history in New Hampshire. Rather it was a series of hints through bits of information found that led to this decision. I first discovered the existence of a Finnish migrant past in our local area when I began my research and landed upon the website for the Historical Society of Cheshire County. My next encounter with this cultures’ migrant history in America was when our COPLAC Professor Alvis Dunn shared this documentary with me on Twitter about Finnish-American Lives. Next, Patrick and I found several good-sized books about the Finns in New Hampshire at our local archives in the Keene State Mason Library. While initially we were interested in both the Lebanese community and the Finnish community in New Hampshire it is the Finns story in America, in New Hampshire, and even more interestingly, in the Manchester area that we are going to attempt to tell.

Now I suspect that more enlightening moments will come for me in the coming days when I return to the Keene State College archives and finally get my chance to visit the Historical Society of Cheshire County. It is there where I hope to find primary sources and supplementary secondary sources that will help support my decision to base my research on the Finnish community in the Granite State.

Conduct open-facing research through the use of various online platforms such as Twitter and WordPress and thorough and public citations of resources. 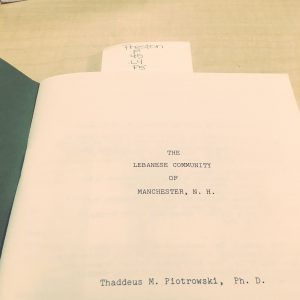 To get from one place to another you must, at the very least, take a step, metaphorically or literally. Even if those steps are small, they will take you somewhere.

Before we begin tracing my path, it is important to know that I am a student in a digital COPLAC course titled Cultural Crossroads where I am to conduct a semester long project concerning the immigration/migration history local to Keene, New Hampshire, among other things. To step into the world of this class you can look here.

My first step was research.

I began with little to no knowledge about my local immigration/ migration history and with just a small step, the typing of a few words, many paths have opened up for me to learn more.

At the Historical Society of Cheshire County I found the names of several presenters for a recent teacher workshop about the history of immigration in the Granite State. These presenters seem to have ample knowledge to share.

So many directions to take my research already!

I wonder where I will go once I speak with some of these people, once I visit the Keene State College Archives, once I utilize other resources shared by the Historical Society of Cheshire County and by my professors!

So, my first reaction to the start of this COPLAC course is an overwhelming urge to start walking.

Keep following me for updates!

This work is licensed under a Creative CommonsAttribution 4.0 International License